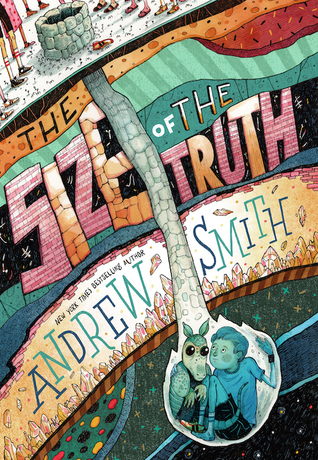 The Size of the Truth by Andrew Smith is an (excuse me) surprising book. It’s a surprisingly funny and surprisingly touching coming-of-age story. Larrabee and I both enjoyed it.

Sam Abernathy is an 11-year-old 8th grader (having skipped both 6th and 7th grade).

When he was four years old, he fell in an abandoned well, and it took three days for him to be rescued. As a result of that experience, he still has claustrophobia. Also, he’s still recognized as the Boy in the Well everywhere he goes in his small town of Blue Creek, Texas.

Now, his parents think he’s on track to go to MIT and invent something that will change the world. But his dream is to be a chef. And his more immediate goal is to survive the school year, and in particular, to avoid a 14-year-old 8th grader named James Jenkins who was responsible (he believes) for his falling into the well.

The book alternates between Sam’s emerging memories of his time in the well (with a talking armadillo?!) and his accounts of his life as an 8th grader.

Here are some of the reasons this book is so funny:

Sam from The Size of the Truth is a character from Smith’s YA book, Stand-Off, but you don’t need to have read that book to enjoy this one.

Tristan Strong Punches a Hole in the Sky by Kwame Mbalia is a must-read for mythology fans. Mbalia draws characters from West African legends (such as Nyama and Anansi) and African-American folk tales (such as John Henry and Brer Rabbit) to create an exciting quest adventure story.

Seventh grader Tristan Strong doesn’t feel like a hero. He feels like a disappointment. He couldn’t save his best friend when they were in a bus accident. Now someone has taken his friend’s journal of stories.

While trying to get it back, he punches a Bottle Tree and accidentally opens a hole in the sky of MidPass. If he wants to get home, he’ll have to help repair the sky, defeat an evil haint, and bring peace to this realm.

Back home in Chicago, Tristan never had any success in the boxing ring, but here he fights with a purpose, taking out wave after wave of fetterlings with his fists. Even better, he learns that he’s an anansesum, a storyteller like his Nana. And storytelling is a true superpower in this world.

If all of that’s not reason enough to read this book, I’ll give you one more: Gum Baby. Out of all the excellent characters in this story, she’s my favorite. Her sass and her sap attacks made me laugh and cheer. Just don’t shush her! 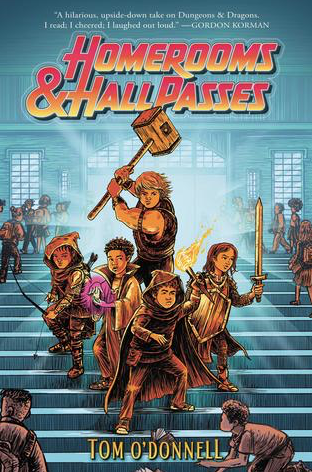 Tom O’Donnell’s Homerooms and Hall Passes has a hilarious premise. Five young adventurers from the realm of Bríandalör meet once a week to play H&H, a role-playing game set in J. A. Dewar Middle School.

Vela the paladin plays Valerie the Overachiever. Devis the thief plays Stinky the Class Clown. Thromdurr the barbarian plays Doug the Nerd. Sorrowshade the gloom elf assassin plays Melissa the Loner. And Albiorix the wizard is the Hall Master.

It’s all fun and games until a cursed jewel sends the five friends to the realm of suburbia for real. There, they’ll have to survive a semester of 8th grade without “blowing it” (failing a class or getting more than three unexcused absences).

That’s easier said than done when they have to do it with no weapons, no poisons, and no magic in a world that doesn’t make sense. For example, in Earth Sciences, they learn that rocks apparently aren’t made by Cragnar, the god of rocks. In English class, they have to write a persuasive essay arguing either that cats are or are not good pets, but it’s unacceptable to say that cats are good because they can see ancient spirits or bad because they might be evil wizards in disguise. And Algebra is a completely baffling subject.

Homerooms and Hall Passes is fast-paced and really, really funny. Larrabee and I both highly recommend it.

I’d heard good things about Maximilian Fly by Angie Sage, but I didn’t expect that it would be my kind of book. It has a person-sized cockroach on the cover after all. Eww.

But I’ve been proved wrong. Maximillian (who is actually a person with cockroach DNA) is a gentle and charming character, and I highly recommend his story to fans of dystopian fiction, unusual narrators, and suspenseful fantasies.

Maximillian Fly is the story of how Maximillian sets out to prove to you and me (the reader) that he’s a good creature by rescuing two children who are being chased by government enforcers. It takes place in the city of Hope, which is trapped under a dome to protect its citizens from the contagion outside and which is run by an oppressive government.

When Maximillian decides to hide the children, his actions have far-reaching consequences for his own quiet life and for all of the people (and roaches) of Hope. After I got over my initial reaction to Maximillian’s carapace, I couldn’t put the book down.

Anna Meriano’s Love Sugar Magic: A Dash of Trouble is a delightful fantasy full of family, friendship, magic, and baking.

Leo wants to help with the preparations for Dia de los Muertos, but her family insists that she wait until she’s fifteen. She sneaks into the bakery to see what she’s missing and learns her family’s secret. Her mother and sisters are brujas!

Not wanting to be left out, she smuggles her family’s old recipe book home in her backpack and starts experimenting with her own baking magic. When she tries to solve her best friend’s problem by baking cookies with a love spell, though, she finds that magic sometimes has unintended consequences.

The magical adventure continues in the next book in the series, Love Sugar Magic: A Sprinkle of Spirits, and another one is expected next year. Larrabee and I enjoyed the first two and are looking forward to the third book.