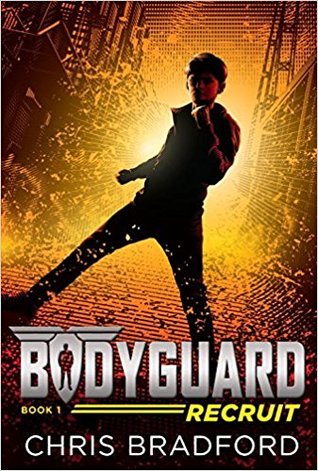 If you’re looking for an action-packed summer read, check out Chris Bradford’s Bodyguard books. Larrabee discovered the first one, Recruit, on the first day of summer vacation and has since binge-read the whole series.

In the first book, 14-year-old British kickboxing champion, Connor Reeves, is recruited into a top-secret squad of teen bodyguards trained to protect young celebrities. After some intense training, he travels to Washington, DC for his first mission: to guard the President’s high-spirited daughter.

You should be warned that the publisher has republished each of the original four books in two parts, so you’ll need to get the books two at a time. (Larrabee and I learned this the hard way.) Recruit ends with a major cliffhanger, and the rest of the story is in the second book, Hostage.

One of the coolest things about these books are all the fascinating details about the way bodyguards assess threats and counter dangers to their principal. After reading them, you’ll find yourself walking around in Code Yellow.