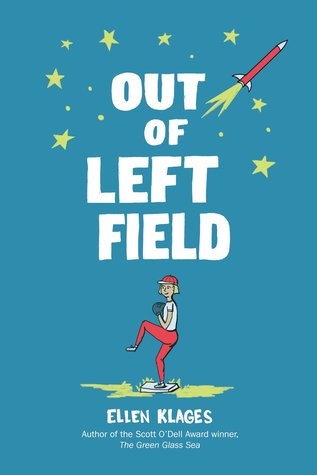 No matter how much baseball trivia you know, I guarantee you’ll learn something new from Out of Left Field by Ellen Klages. For example, in 1947, Sophie Kurys of the All-American Girls Baseball League had 201 stolen bases in one season. And she wasn’t allowed to wear baseball pants. She had to slide in a skirt!

Ten-year-old Katy Gordon is the best pitcher in her Berkeley, California neighborhood. None of the boys in the summer sandlot games can hit her “Sunday pitch.” But when she tries out for a Little League team, she learns that girls are not eligible to play under any circumstances.

The year is 1957. The national news is full of the space race and the civil rights movement. The local news is buzzing with the New York Giants’ move to San Francisco. Katy is in the 5th grade, and when she chooses women baseball players as her social studies research topic, she uncovers a fascinating history.

Katy is the younger sister of Dewey and Suze from Ellen Klages’ The Green Glass Sea (set in Los Alamos, New Mexico in 1943) and White Sands, Red Menace (set in Alamogordo, New Mexico in 1946), but you do not have to have read the other books to enjoy this one.

Out of Left Field is an engaging story with baseball, history, librarians, scientists, a diverse cast of characters, and even a cameo appearance by Willie Mays. I recommend it!

5 thoughts on “Book Review: Out of Left Field”