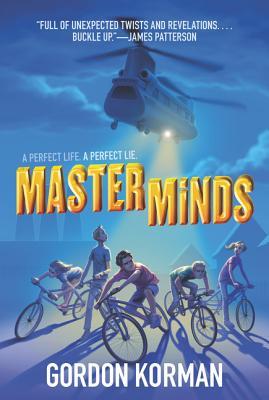 Masterminds is the first book in a thrilling trilogy by Gordon Korman. Larrabee loved it and insisted that I drop everything and read it.

Eli Frieden lives in Serenity, New Mexico, an isolated and idyllic town with a population of 185. Eli’s dad is the school principal and the mayor and reminds him often how lucky he is to live in a community with no crime and no poverty.

One day, his best friend suggests that they ride their bikes out of Serenity, something Eli’s never done in all his thirteen years. When they get to the town limits, though, Eli starts to feel sick. Before they know it, they’ve been rescued by the local security force (nicknamed Purple People Eaters by the kids) in a helicopter. A few days later, Eli’s friend is shipped off to live with his grandparents in Colorado, but he leaves a note where only Eli can find it: “There’s something screwy going on in that town.”

The story of what’s really going on beneath Serenity’s perfect facade is told through the point of view of five different kids. I don’t want to spoil any of the plot twists, so I’ll just say that Masterminds has a mix of action, mystery, and suspense that’s rare in middle grade books.

The other two books in the series are Criminal Destiny and Payback, and Larrabee highly recommends them too. He says the series gets better and better!