Nerd Camp by Elissa Brent Weissman is a book that will make you smile.

Ten-year-old Gabe is excited about his summer for two reasons: (1) he’s been accepted to the Summer Center for Gifted Enrichment, a six-week sleepaway camp, and (2) his father is getting remarried, which means that he’s getting a new brother his age named Zack.

But Zack is not at all what Gabe expected in a brother. Zack is a cool ten-year-old from L.A. with a cell phone and gel in his hair. He dismisses as “nerdy” a lot of things Gabe likes (such as reading and math team). He’s jealous of Gabe’s plan to go to sleepaway camp, but Gabe doesn’t dare admit what type of camp it is.

The truth is that Gabe is looking forward to learning logical reasoning, writing poetry, and memorizing the digits of pi with his bunkmates in addition to kayaking and swimming and all that camp stuff. But Zack’s perspective makes him ask the question:  “Am I a nerd who only has nerdy adventures?”

His hypothesis is “no,” but it will take a summer full of nerd camp escapades for him to prove it to himself.

This book won the Cybils Award in 2011. Larrabee and I both enjoyed it, and Larrabee’s already read the sequel, Nerd Camp 2.0.

Highly recommended for cool nerds of all ages (especially ages 8-10). 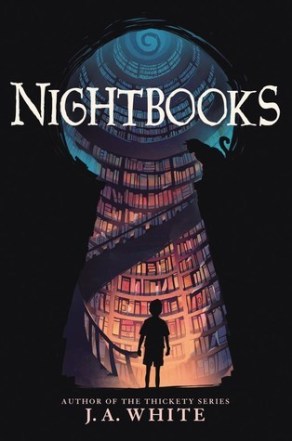 Nightbooks by J. A. White is a modern day Hansel and Gretel meets The Arabian Nights with a twist.

Alex feels like a weirdo because he writes scary stories in journals he calls his nightbooks. One night, he sneaks out in the middle of the night, determined to get rid of them once and for all. But the sound of his favorite horror movie lures him into a strange apartment, and he finds himself trapped by a real-life witch. This witch likes scary stories, and she’ll keep him alive as long as he comes up with a new one each night.

Some of the things I liked best about this book are:

Blaine would have loved this book when he was younger. Larrabee found it a bit too creepy. I would recommend it to kids who crave scary books, such as Adam Gidwitz’s A Tale Dark and Grimm, R. L. Stine’s Goosebumps series, or Alvin Schwartz’s Scary Stories to Tell in the Dark. 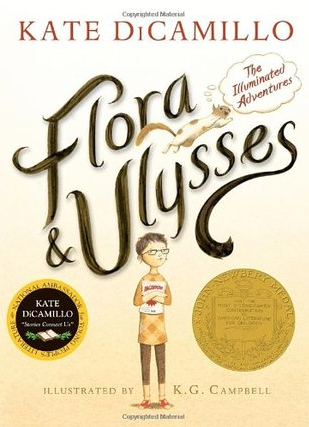 Flora & Ulysses by Kate DiCamillo is the story of Flora, a comic book reader and natural-born cynic, and Ulysses, a squirrel with superpowers as a result of a close encounter with a vacuum cleaner.

If that sounds wacky, it is. Delightfully wacky. It’s a quick and funny read told from the point of view of both girl and squirrel, and it includes comic-style illustrations by K. G. Campbell. It’s also a touching meditation on loneliness, hope, and love. Larrabee and I both liked it a lot.

This book won the Newbery Medal in 2014. As Flora would say, “Holy bagumba! Holy unanticipated occurrences!”

If you’re missing summer as much as we are, you should pick up a copy of The Cardboard Kingdom by Chad Sell. Larrabee and I aren’t normally big fans of graphic novels, but we both enjoyed this one.

It’s a collection of short stories about a diverse group of kids who use ordinary cardboard to transform themselves and their neighborhood. The Sorceress, the Big Banshee, the Huntress, the Gargoyle, and others go on imaginative quests and navigate real world challenges during summer vacation.

The art is terrific and the stories are engaging. I wish Larrabee and I had read The Cardboard Kingdom together because it would have prompted some good discussions.