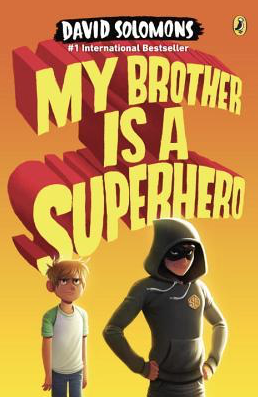 Eleven-year-old Luke Parker is an expert on comic books and superheroes. That’s why it’s SO unfair that Zorbon the Decider chooses his older brother Zack to save two universes from the threat of Nemesis AND gives him six superpowers. Now Zack is Star Guy, and Luke is still just Luke.

It turns out that being a superhero’s younger brother is complicated, especially when the girl next door, Lara Lee, is intent on uncovering Star Guy’s secret identity. Things get even worse when Zack loses his powers and gets kidnapped by an unknown villain. It’s up to Luke, his friend Serge, and Lara to save him.

My Brother Is a Superhero by David Solomons is a clever, funny, fast-paced adventure. Some of the things I liked best about this book:

Larrabee’s Aunt Kay and Uncle Christian gave him this book. I have to say, it’s a perfect gift for a younger brother. He read it months ago and loved it. I’m just now reviewing it because he left it in his cubby until the last day of school…

There are three more books in the series so far. Larrabee has read the second one, My Gym Teacher Is an Alien Overlord, and recommends it too. And the next two are on his summer reading list.