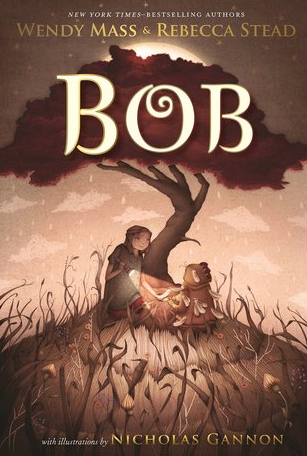 BOB by Wendy Mass and Rebecca Stead is a charming story about an almost 11-year-old girl and a small, green creature named Bob.

When Livy goes to visit her grandmother in Australia, she finds Bob in the closet. She’d forgotten all about him, but he’s been waiting for her since she last visited five years ago. He doesn’t remember how he got there, and he’s counting on her to help him find his way home.

The story is told from both Bob’s and Livy’s point of view as they try to solve the mystery of his presence on her grandmother’s farm. I don’t want to give any spoilers, so I won’t say what kind of creature Bob actually is or where he’s from. You’ll just have to read the book!

Some of the things I liked best about this book are:

“I feel bad that I can’t remember anything about Gran Nicholas’s house. On the table in her kitchen Gran has lined up three things I do not remember:
1. A green stuffed elephant in overalls.
2. A net bag full of black chess pieces.
3. A clunky old tape recorder.
‘You loved these things when you were here before,’ Gran Nicholas tells me.
But I don’t remember any of it.”

Livy’s grown up now–almost 11–different but still the same. And with Bob’s help, she rediscovers something about her fearless, fun-loving 5-year-old self.

BOB is a quick, easy read that would make a perfect first summer reading book. Larrabee has heard me talk about it so much that he’s been asking when he can read the book about the green creature. He recently read and enjoyed Wendy Mass’s Pi in the Sky.

Thank you to Macmillan Children’s Publishing Group and NetGalley for providing me with an advance copy of this book. It was published at the beginning of the month and is available in bookstores now. 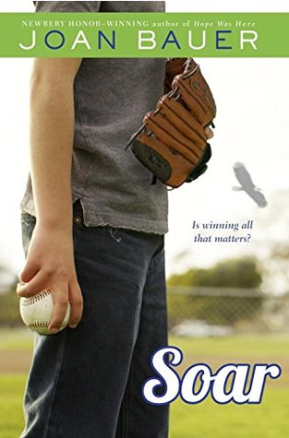 We’re a baseball-loving family, so I always have an eye out for books about the game. I recently made a lucky find at the library: Soar by Joan Bauer. Like its protagonist, twelve-year-old Jeremiah, this book is funny, profound, quirky, and inspiring all at the same time.

Jeremiah loves baseball. He can’t play, though, because he’s recovering from a heart transplant. He even has to get his doctor’s approval to accompany his adoptive father on a two month consulting job.

Their temporary new home, Hillcrest, Ohio, is known for its championship baseball team. But when the high school coach is embroiled in a steroids scandal, the middle school is ready to abandon its baseball team. Jeremiah doesn’t want to see the kids or the town give up on baseball, so he steps up to coach the team.

I read this book first and recommended to Larrabee. He was skeptical, but he agreed to take a chance on it and ended up a big fan.

This book is all about baseball, and yet it’s not just about baseball. Jeremiah also watches eagle cams, interacts with his dad’s robots, and befriends a neighborhood dog, among other adventures. It raises important issues, such as winning in youth sports, without being preachy. Instead, it’s a fun book about a lovable group of kids playing a great game.