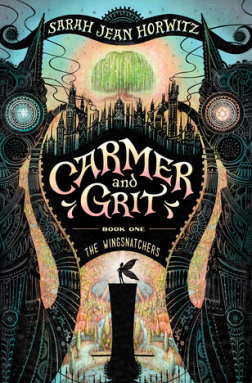 It’s a fantasy adventure about Carmer, a magician’s apprentice, and Grit, a flightless faerie princess, who team up to stop a threat to the world of the fae.

Unlike some of his friends, Larrabee does not consider himself an expert on faeries. He’s obsessed with both magic tricks and machines, though, so he chose this book based on the promise of amazing stage magic and terrifying mechanical cats. On those points, the book did not disappoint. And the faeries turned out to be pretty cool too.

We enjoyed the fast-moving plot and the intriguing setting, and we look forward to the sequel.