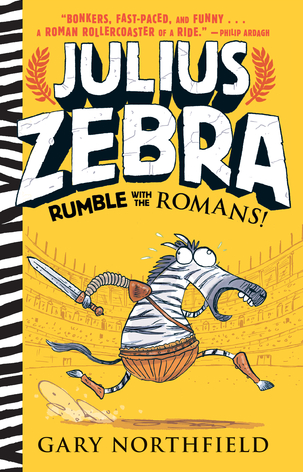 If you’re looking for a zany adventure to add to your summer reading list, Larrabee recommends Julius Zebra: Rumble with the Romans! by Gary Northfield.

Julius is just trying to get away from the stinky watering hole and his annoying big brother when he’s captured by Roman soldiers. They take him, along with a warthog and a lion, all the way from Africa to Rome itself. Improbably, he ends up training as a gladiator to fight in the Colosseum on Emperor Hadrian’s birthday.

It’s not a short book — at CCLXVI pages. But it’s an easy read with lots of funny comic-style illustrations.

Along with the wacky cast of animal characters, the story contains nuggets of real historical information. Years later, when Larrabee studies Ancient Rome in school, he’ll probably find himself saying, “I learned that from Julius Zebra.”

P.S. Never call Julius a stripey horse. And check out his next adventure in Julius Zebra: Bundle with the Britons.