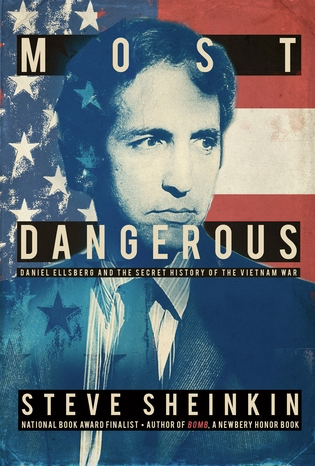 Most Dangerous: Daniel Ellsberg and the Secret History of the Vietnam War is another excellent history book for middle and high school readers by Steve Sheinkin, the author of Bomb. Blaine, Mark, and I all enjoyed it.

The book tells Ellsberg’s story from his first day of work at the Pentagon, coincidentally the day of the Tonkin Gulf incident, to his decision to leak the Pentagon Papers and his trial for violating the Espionage Act. At the same time, it recounts many events of the late 1960s and early 1970s: the U.S. military escalation in Vietnam, the anti-war protests at home, the Watergate break-in.

To an adult, this is recent history, but to a young person, it’s just history. Yet, it’s incredibly relevant to today’s news. For example, American military action overseas is often criticized as “another Vietnam.” Watergate spawned a long list of “-gate” scandals, including the recent “deflategate.” And in the epilogue, Sheinkin draws a parallel between Ellsberg and Edward Snowden.

Most Dangerous is a fast-paced, compelling read.