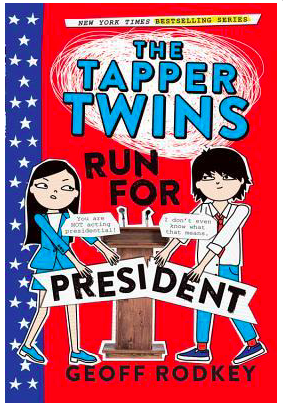 The Tapper Twins Run for President is an “oral history” of the Culvert Prep sixth grade class elections for the second semester. It consists of interviews conducted by Claudia Tapper with her handwritten commentary in the margins. Photographs, drawings, school newspaper articles, and text and chat exchanges are included too. The result is a funny and fast-paced tale of middle school politics.

Claudia Tapper is the three-term incumbent with a long career in student government. Her twin brother Reese Tapper is more into soccer and video games. He only decides to run for class president because he’s upset that the school banned soccer balls from the rooftop playground (and because he’s competitive with his sister). James Mantolini is the third and zaniest candidate, running on a “free range education” platform to get rid of classroom furniture.

This election story features everything from polling data to scheming campaign managers, from an in-game campaign rally to secret Starbucks meetings, from allegations of media bias to debate drama (with a live squirrel). And it has a happy ending. Enjoy!