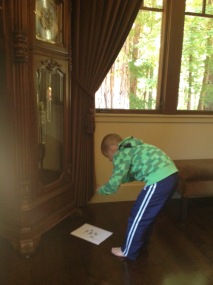 Q:  What did Mr. Tibbs use to make the legs of the breakfast table for the Big Friendly Giant?

A:  Grandfather clocks, of course!

Did you know that one? Larrabee did. It was Clue #4 in his The BFG-themed treasure hunt.

A book-based treasure hunt makes a great reading incentive. Here’s our deal: I pick two books, and Larrabee chooses two more. When he finishes all four books, he earns his treasure hunt.

This summer, I’ve learned a new technique on Skillshare to take our bookish treasure hunts to the next level. In “Fun with Kids – Create an Augmented Reality Scavenger Hunt,” Paula Guilfoyle showed me how to use Google forms and the Aurasma app to design a high-tech hunt.

Here’s an example from our first Harry Potter-based treasure hunt:

Larrabee scans the cover of Harry Potter and the Goblet of Fire using the Aurasma app on my phone. He sees a question:

In Harry Potter and the Goblet of Fire, who represents Durmstrang in the Triwizard Tournament?
A. Fleur Delacour
B. Viktor Krum
C. Igor Karkaroff

Look where Harry might have to go in our house to figure out the clue in the golden egg.

If he looks in the bathtub, he finds the cover of Harry Potter and the Order of the Phoenix, which he can scan to get his next quiz question and his next clue.

The seventh clue leads him to his prize — a book and a piece of candy. In addition, to the Harry Potter and BFG treasure hunts, I’ve made a Frog and Toad-themed one (based on the books, not the musical). If Larrabee keeps reading, I may need to come up with one more before the summer ends.